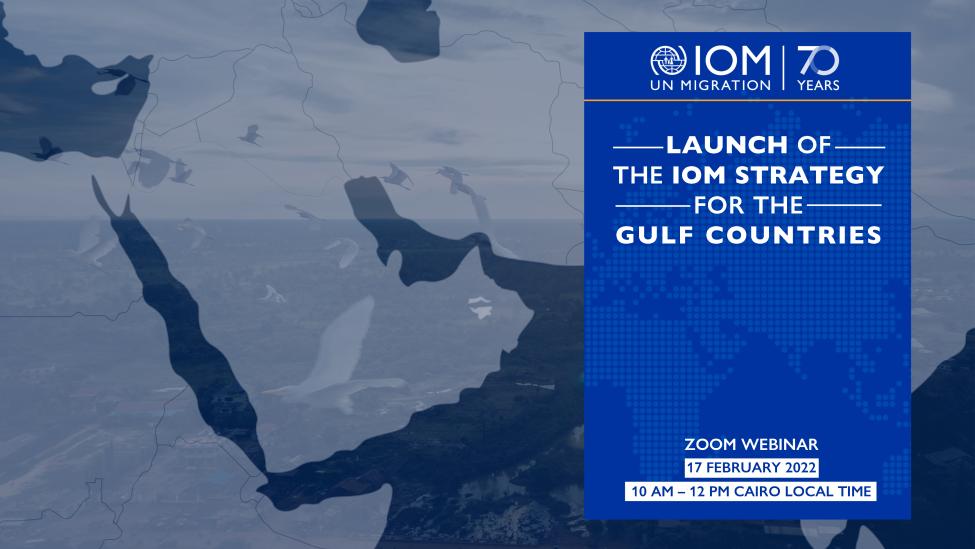 Cairo – (February 17th) The International Organization for Migration (IOM) launched today in a virtual conference its 2021-2024 Strategy for the Gulf countries aiming to guide its work with governments and stakeholders in the region towards enhancing migration governance to harness the benefits of migration for everyone.

"IOM Strategy for the Gulf Countries is launched at a critical time to enhance IOM’s expanding efforts in the Gulf countries to ensure that migration is safe, orderly, and regular and is guided by national programming,” said Mrs. Carmela Godeau, IOM’s Regional Director for the Middle East and North Africa.

The strategy puts forward IOM’s vision for continued collaboration with Gulf governments and stakeholders on key migration priorities. It comes in alignment with national development agendas, visions, Gulf countries’ commitment to the Global Compact for Safe, Orderly and Regular Migration (GCM) and the 2030 Agenda for Sustainable Development (SDG), while being responsive to the context and specificities of each country.

Through the strategy, IOM reiterates its capacity to work with Gulf governments and stakeholders in new areas, as well as encourages inter-state consultation mechanisms between Gulf countries and countries of origin and transit in Asia and Africa.

“The IOM Strategy for the Gulf Countries is an essential reflection of IOM’s ongoing commitment to work in and with Gulf countries on critical migration issues. IOM has been expanding its footprint in the Gulf countries for several decades,” said Mr. Hassan Mostafa Abdel-Moneim, Special Advisor to IOM’s Director General for the Gulf. “We look forward to continue engaging with our partners in the Gulf aiming to establish a shared vision on migration governance priorities while ensuring that the rights, dignity, and safety of all people are maintained,” he added.

IOM established its presence in the Gulf in 1991 when it opened its office in Kuwait. During the past several decades, IOM continued to play a growing role in the Gulf and has more recently expanded its activities in a number of countries in the region.

Currently, IOM has missions in Bahrain, Kuwait and Qatar. IOM also has active presence and programmes in Saudi Arabia and the UAE and provides direct assistance to migrant workers and their families and Victims of Trafficking in Oman.

The United Nations Networks on Migration (UNNM) have been established in five Gulf countries. IOM is co-leading these networks in partnership with other UN sister agencies to prioritize important cross-cutting migration issues and support governments in achieving GCM objectives and the SDGs.

In 2020, more than 30 million international migrants were living in the Gulf countries, according to UN data.

To read the full strategy: https://bit.ly/3LM7WBh

Read the Executive Summary of the Strategy from HERE.

IOM Holds Inter-Regional Dialogue in Morocco to Discuss Implementation of the Global Compact for Safe, Orderly and Regular Migration